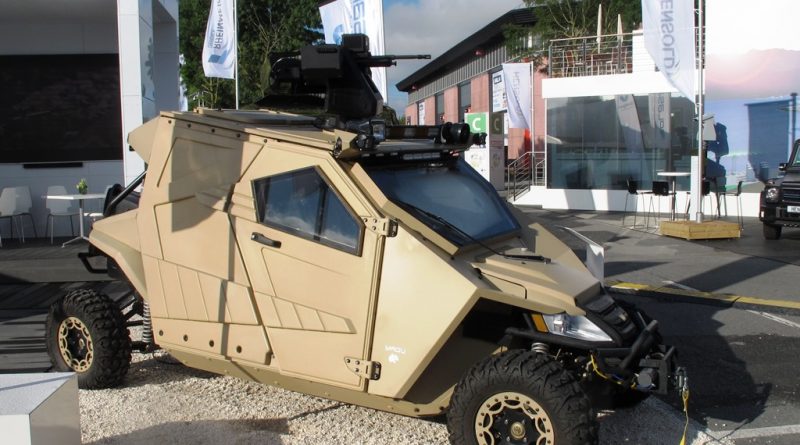 Patrolling a border in some areas has become a dangerous mission, small arms fire being the typical threat; a light, relatively inexpensive vehicle, with sufficient protection, might represent one of the solutions. One of the major players in the protection field, Plasan of Israel, decided to develop a concept car, the Yagu. The automotive elements are those of an all-terrain vehicle, the Wildcat 4 1000 produced by Arctic Cat, now a Textron company. Powered by a 95 hp water-cooled gasoline engine linked to an automatic transmission with hi and low range, it can travel in 2×4 or 4×4 configuration depending on the terrain, and is fitted with double A-arm suspensions at the front and link trailing arms at the rear, tires being 28x10R14. Plasan developed the armoured cabin that provides an all-round Level B6+ protection, which can stop 5.56×45, 7.62×39 and 7.62×51 mm rounds. This brings the dry weight of the Yagu up to 1,480 kg, leaving 350 kg of payload, sufficient to host three passengers and one light RCWS; the driver and commander seat side by side, with the gunner in the back at the centre of the vehicle.

The RCWS can be armed either with a 5.56 or a 7.62 mm machine gun. Being a patrol vehicle, Plasan decided to integrate in the Yagu as optional a VTOL drone; this can take-off and land automatically, and can fly at 64 km/h with an endurance of around 30 minutes, providing situational awareness at distance to the Yagu crew. Beside its intrinsic mobility due to the chassis the Yagu is also capable to operate in very confined spaces thanks to its dimensions, width being limited to 1.62 meters while length is of 3.79 meters. Mostly a security vehicle, it can however attract some interest also from military units, Plasan having shown the Yagu to Eurosatory to add feedbacks to those already obtained last April, when it unveiled its new concept car at Expo Securidad in Mexico City. Back to Israel the Yagu will continue company tests, Plasan looking into potential customer’s comments to review the concept and produce the prototype of a future product.