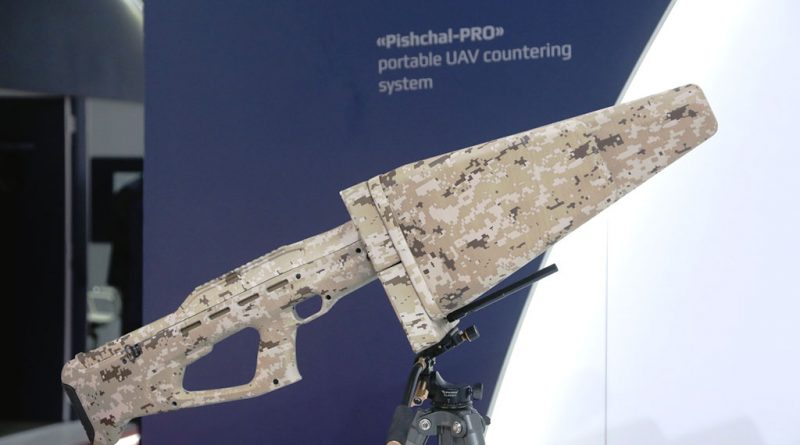 At the recent Dubai Airshow 2019 held between 17 and 21 November in the United Arab Emirates (UAE), Russian defence industry strongly indicated its firm intention to enter the cutting-edge branch of counter-unmanned aerial vehicle (C-UAV) systems. It is noteworthy that Russia develops two main clusters of this realm, placing an emphasis on both mobile and stationary anti-drone devices.

Russia’s arms exporting company Rosoboronexport (a subsidiary of Rostec state corporation) unveiled its new concept of a four-tier C-UAV defence system, which comprises a wide range of solutions ranging from tactical electronic warfare (EW) devices to man-portable anti-drone guns. The company’s Director General Alexander Mikheev told EDR On-Line that the new concept had already been shaped. “We have sent relevant proposals, including that regarding an offer to create a multi-layer tactical EW system, to our partners in the Middle East, North Africa, and other regions,” Mikheev said.

The first level of the above-mentioned anti-drone system includes the Repellent C-UAV device, which has been developed and produced by JSC Defense Systems (Oboronitelniye Sistemy). The Repellent can detect and spoof UAVs at a distance of no less than 30 km. The system features high level of ruggedness: Rosoboronexport claims that it functions under the harshest climatic conditions, including dust, rain, and strong wind. The Repellent detects both the drone and its ground control station, jamming every control and navigation datalink.

The devices which have been integrated into the second tier of the system protect critical military and civil infrastructure. This layer comprises the Sapsan-Bekas mobile C-UAV system and Kupol-PRO and Rubezh-Avtomatika devices. The Sapsan-Bekas is fitted with both active and passive UAV detection units, allowing the system to detect even drones with low radio emission. The complex can conduct all-round or sector scanning.

Both Kupol-PRO and Rubezh-Avtomatika C-UAV systems establish a radio-electronic ‘dome’ with a radius of no less than 3 km, which provides protection against single and swarm multidirectional drone attacks.

Rosoboronexport pays specific attention to portable C-UAV hardware. At the Dubai Airshow 2019, the company unveiled two new tactical anti-drone systems, namely, Pishchal-PRO and Luch. Being among the lightest C-UAV solutions on the global market, the Pishchal-PRO weighs 3.5 kg (it is even lighter than the Kalashnikov AK-103 7.62 mm assault rifle that has a weight of 3.6 kg) and jams a UAV’s navigation and control channels at a distance of 2 km. The device, pictured in the opening photo, can be integrated into an individual gear kit.

The Luch portable C-UAV system can be rapidly deployed to protect various objects against drones. The system detects UAVs and jams them in a designated area at a distance of no less than 6 km.

As the global C-UAV market is just being shaped, the Russian industry provides almost all types of electronic solutions to create a local multilayered anti-drone protection system. Considering the fact that Rosoboronexport has a cost-effective tactical air defence portfolio, which includes the Tor surface-to-air-missile system and the Pantsir-S1/S1M self-propelled anti-aircraft gun-missile system, Russia could become a strong player on the global C-UAV market with both soft- and hard-kill hardware.