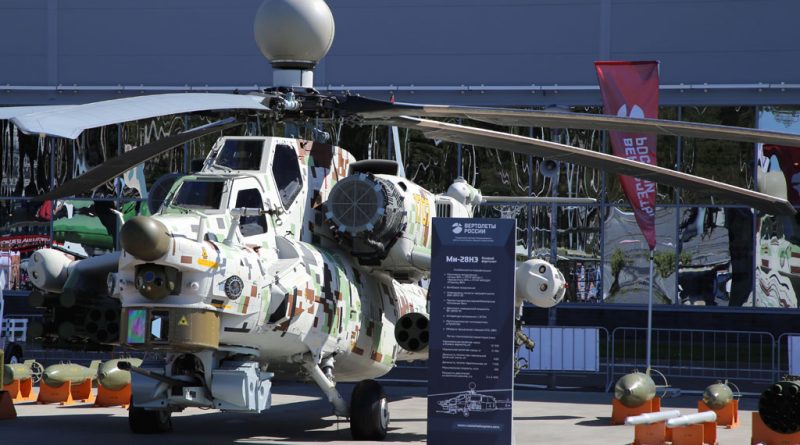 While fixed-wing aircraft and heavy helicopters were exhibited at the Kubinka air base, the Patriot complex hosted light and medium rotary wing aircraft, including attack and combat ones. Two of them where exhibited in the latest version, the upgrade providing increased firepower and more.

The latest version of the Mi-28NE Night Hunter has an 11.5 tonnes standard take-off weight, 600 kg more than the original version, and a 12.1 tonnes maximum TOW. This is allowed by the adoption of two Russian-made Klimov VK-2500-01 turboshaft engines each providing 2,400 hp, 200 hp more than the previous Ukraine-made TV3-117VMA, and by improved rotor blades that provide better performances in critical conditions such as hot-and-high. The helicopter can reach an increased maximum speed of 195 knots, combat range being 425 km while ferry range is of over 1,000 km.

The Mi-28NE had already an impressive armament suite, which has been further increased. The chin-mounted Shipunov 2A42 30 mm cannon is the on board automatic weapon, while stub-wings are fitted with two pylons each under which a whole range of weapons and sensors can be installed. The latest iteration of the Night Hunter can be armed with 9M123M Khrisantema-VM laser beam-riding missile, the upgraded version of the 9M123.

The 10 km range needs a sensor looking further ahead; for this reason the helicopter can be equipped with an external target acquisition radar installed under one of the pylons, its optronic suite being also upgraded, the new OPS-28M turret having been installed. Beside the new missiles, other such systems can be fired by the Mi-28NE like the 9M120M Ataka-VM, Igla-V air-to-air missiles, rockets and free-fall bombs. Fitted with a wholly digital avionics, the new version is also able to operate in synergy with unmanned air vehicles.

The second modernised helicopter unveiled at Army 2018 was the Mi-35M; the latest version can be armed with the supersonic 9K121 Vikhr-1 laser-guided missile that can fly at Mach 1.8 up to a 10-12 km range. This new weapon allows a considerable increasing in range and lethality for the modernised version of the ubiquitous Mi-24 Hind.