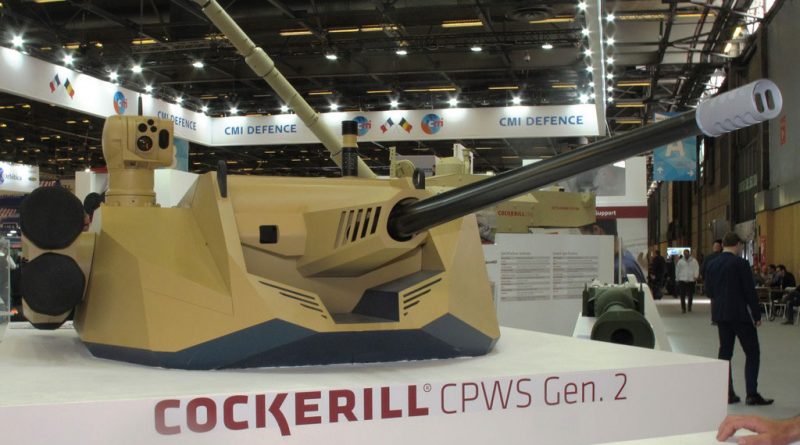 The CMI Defence stand surface being quite conspicuous, in fact the exhibition area of the Belgian turret-maker should be considered much wider, as its products were visible on many platforms along the aisles of Eurosatory 2018, as well as in the outside area. The Cockerill 3000 series is being quite successful, the company having delivered around 30 turrets armed with a 105 mm gun and over 100 with the 30 mm cannon, production capacity being of 20 turrets per month.

With its new medium/heavy calibre turret well accepted by the market CMI Defence decided to renew its portfolio in the light segment, unveiling the concept of its CPWS Gen. 2.

A one-man turret, it is made of welded ballistic aluminium and can be armed with a 25 mm or a 30 mm cannon, the system being as modular as possible; elevation is between -10° and +60°. The cannon can be fitted with a single or dual feeding system with a minimum of 155 ready-rounds and with the capability to reload under armour. The CPWS Gen.2 can be protected up to Level 5, one level up compared to the older model. The coaxial weapon is at the left of the main one, and can be a 7.62mm or 12,7mm machine gun, or a 40mm automatic grenade launcher. Up to eight smoke grenade launchers can be installed around the roof. On the right of the turret we find the gunner’s optronic package, which can be tailored to customer’s needs, while on the roof on the right side we find the commander’s panoramic sight, the mock-up being fitted with Safran’s Paseo. In the brochure CMI Defence declares detection-reconnaissance identification ranges of 6.8, 2.6, 1.4 km in the APC version and 11.5, 4.9 and 2.5 km in the reconnaissance versions, which will be fitted with different optronic packages, but in the end these data might well be determined by the customer choice. Antitank capabilities are boosted by adding two antitank rocket launchers on the right side of the turret, two Instalaza Alcotan 100 being fitted at the exhibition. The main difference with the previous generation light turret comes from the roof; in the CPWS 20-25-30 this was closed, the operator being unable to exit the turret from the top, or to have a direct view of the situation. Lessons learned from recent field experiences of many customers have led CMI Defence to adopt a wholly different approach, designing a turret provided with a hatch that offers four options. When the situation is dangerous the hatch is fully closed, offering maximum protection, however when direct observation is required in order to have a better awareness the hatch can be elevated in order to provide all-around vision. In an emergency situation the hatch can be opened, it is hinged on the forward side, allowing the operator to escape protected by the hatch itself. In operations other than war, when the risk is considered minimal, the hatch can be totally removed, allowing the vehicle commander to have unobstructed direct view. The declared weight of the CPWS Gen.2 with the weapons but without ammunition and add-on armour is 850 kg, which means the turret can be easily integrated in 4×4 and 6×6 vehicles.