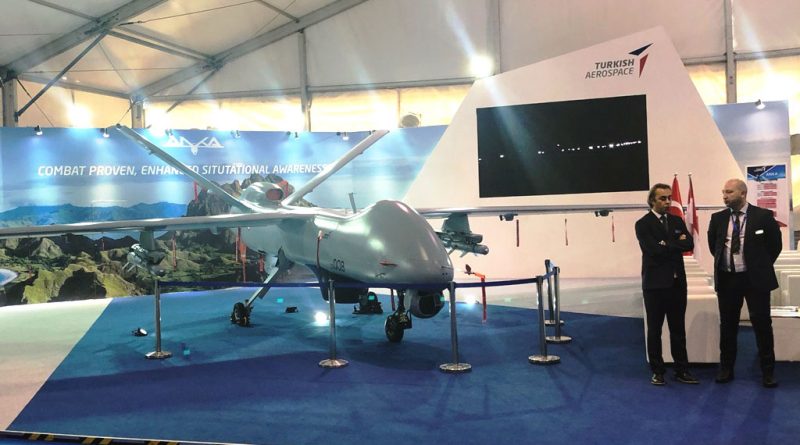 First appearance at Indo Defence for Turkish Aerospace Industries’ Anka MALE (Medium Altitude Long Endurance) UAV system. Capable to execute day and night, all weather reconnaissance, target detection/identification and intelligence missions with its EO/IR and SAR payloads, it also features autonomous flight capabilities, including automatic take-off and landing. The TAI UAV has been deployed to Indonesia in the last three months, since TAI announced it is seeking opportunities to collaborate with the Indonesian industry, namely PT Dirgantara Indonesia, in order to promote the Anka for a local tender.

With a wing span of 17.3 meters and a length 8.6 meters, it can fly for 24 hours with a service ceiling of 30.000 ft (MSL). Its data link allows it to operate 200 km off base, its powerplant being based on a 155 hp heavy fuel engine linked to a three-blade pushing propeller. The Anka can accept a 200 kg payload, which might include both sensors and weapons, while maintaining the full endurance.

At Indo Defence the TAI UAV system is exhibited with its satellite communications system, as well as with its weapon suite that includes Roketsan’s 22 kg MAM-L Smart Micro Munition.

Turkish Aerospace Industries is ready to adapt its Anka in order to meet specific Indonesian requirements, apparently service ceiling should be 40,000 ft, as well as to incorporate local companies in the supply chain. The Turkish aerospace company is looking further, as this cooperation is not limited to the UAV field but might well extend to other potential markets and requirements.