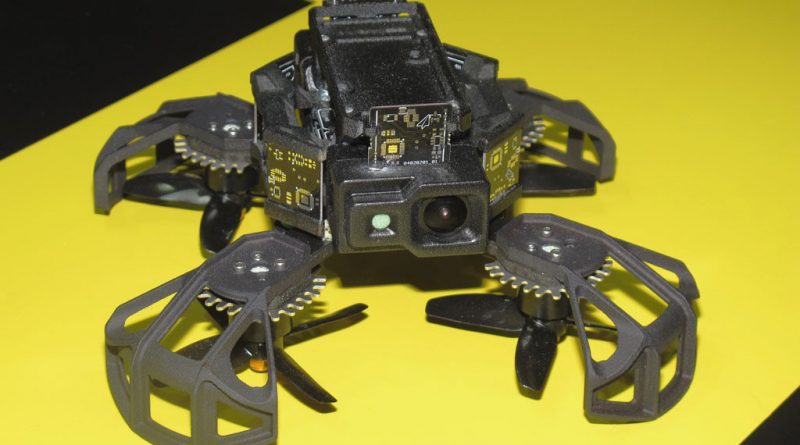 In fall 2017 EDR Magazine reported on a tour organised by GICAT, the Association of French industries involved in land and air-land defence and security matters, about Innovation. One of the many topics mentioned in the article was related to a programme, managed by DGA Lab, aimed at acquiring a very peculiar indoor drone for Special Forces. The system was required to evolve inside buildings with stairs, corridors, etc, flying or ground systems being both considered. At that time six candidates were left, but due to the competitive phase no more details were provided. Since then DAG Lab made the selection, and the winning system was exhibited at Eurosatory in the Aeraccess stand.

A company specialised in integrating complex solutions into UAVs, Aeraccess already had in its portfolio a system, known as Sparrow-Hawk, designed for operating inside buildings in GPS-denied conditions. A quadcopter with protected rotors, it is fitted with sensors capable to feel an obstacle at 6 meters distance, to locate itself within 0.15 meters, and to move in a 0.7 meters wide corridor thanks to a stabilised collision avoidance mode. Other modes include manual and semi-automatic door passing and constant altitude for stairs climbing. The Sparrow-Hawk is fitted with a thermal and a low-light TV cameras with 180° pan-tilt front sensors, and is not only capable to acquire images for real time information, but also to do real time environment scanning providing the digital mapping of the inside of the building. The Aeraccess UAV has been adopted by the RAID, the special operations tactical unit of the French National Police. 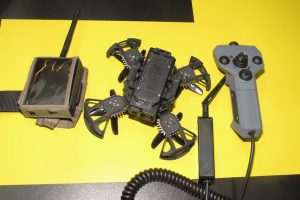 With the experience acquired in developing the Sparrow-Hawk Aeraccess was one step ahead of many competitors. To answer the requirement set by Special Forces it had now to considerably miniaturise its system. This led to the NanoHawk, which in the end succeeded in becoming the future indoor nano-UAV of French SFs. The result is a quadcopter that stays in one hand, its dimensions being 18 x 18 cm, on which everything is studied to keep the weight as low as possible: rotor protections are limited to the strict minimum, obstacle avoidance sensors circuits are visible, hoods being an unnecessary weight, two sensor packages, each one with a thermal and a visible sensor, being installed front and rear. Overall the NanoHawk weighs less than 300 grams, and is powered by three batteries that provide an 8 minutes flight time, considered more than sufficient for the type of mission required. Reloading time for batteries is one hour, however the NanoHawk can be ready to take the air in minutes as batteries can be quickly changed.

The data link allows both to control the airframe and to receive images, the link exploiting the same encryption system but in different frequency bands, the NanoHawk being able to operate three stairs up or three stairs down from the operator position. As well as its bigger brother, it is capable to provide a 3D digital mapping of the building. A simple one-hand controller was adopted, most functions being automated, while the monitor can be positioned on the operator body armour, on its wrist or on the back of the shield. Each system is made of a data link, a controller, a monitor and two airframes. The first units to order the NanoHawk were the local RAID detachments, Aeraccess waiting for the DGA contract that will provide the system to French Special Forces, for which the programme was launched. Further evolutions will consider the addition of LIDAR sensors and the capacity to fly swarms of NanoHawks.