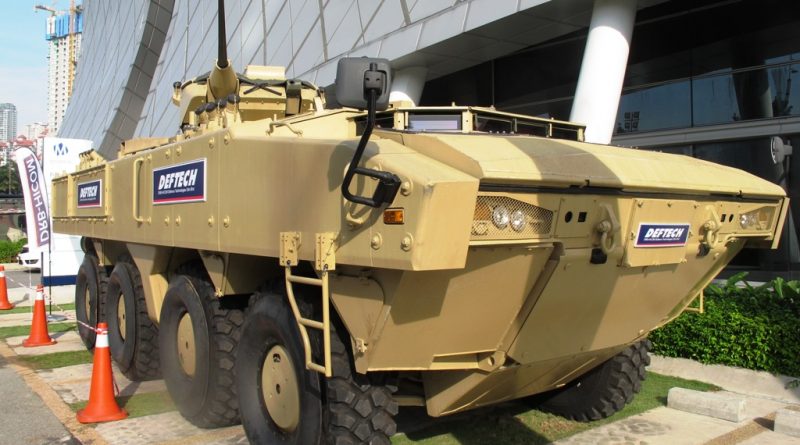 The main programme that currently involves the premier military vehicles producer in Malaysia, Deftech, is the production of 257 AV-8 Gempita 8×8 armoured wheeled vehicles for the Malaysian Army. The Gempita welcomed DSA visitors since the beginning, as one IFV version fitted with the FNSS Saber 25 turret was exhibited outside the MITEC venue. Sand-painted, this 8×8 armoured vehicle had just come back from Saudi Arabia where it carried out a series of trials. It is one of the 118 Gempita produced at the company’s Pahang plant and already delivered, and was provided to the Middle East country thanks to a government-to-government agreement. The contract between Deftech and the Malaysian Ministry of Defence was signed in 2010, while production started in 2014 and will end in 2020, with the delivery of the last vehicle. Among key subcontractors we find FNSS of Turkey, the AV-8 being a close derivative of its Pars 8×8, Denel, providing some turrets, and Thales, providing sensors and vetronics. “Our strategic alliance with Turkey is very forthcoming, and in the AV-8 programme we appreciated very much the transparency in technology transfer and assistance from our Turkish partner,” a senior Deftech official told EDR Magazine. 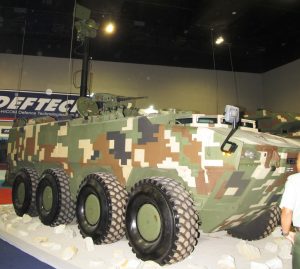 Twelve versions are to be built, DSA 2018 marking the first public appearance of the Surveillance version. It is fitted with a telescopic mast on top of which we find a Squire radar and a Catherine optronic sensor, both provided by Thales. Six versions had already been delivered, the RCWS fitted with a Denel system armed with a 12.7 mm machine gun, the aforementioned IFV 25, the AFV fitted with Denel’s Modular Cannon Turret 30 armed with a GI 30 cannon, the Armoured Command Vehicle, the Armoured Vehicle Signal, and the Antitank Vehicle, the latter fitted with an MCT turret armed with Denel’s ZT35 Ingwe missiles. Overall 12 variants will be produced, those still to be delivered being thus the Armoured Ambulance, the Armoured Recovery Vehicle, the Maintenance Vehicle, the Engineering and NBC Reconnaissance Vehicle, and the 120 mm Mortar Carrier. A second batch of Gempita is foreseen, although for the time being the Malaysian Armed Forces modernisation plan has higher priorities, thus a decision will probably come around the end of the decade, to possibly link up the production phase with the end of Bach 1 production. 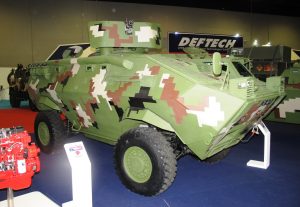 For the time being the Royal Malaysian Army still operates the Condor 4×4 of German origin. In order to extend its operational life Deftech is proposing an upgrade programme. A proof of concept vehicle exhibited at DSA features considerable improvements in the driveline, the engine and the chassis. A new engine was installed, increasing power from 179 to 212 hp, slightly increasing power-to-weight ratio although the GVW augmented from 12 to 14 tonnes, payload remaining at 2 tonnes. The new engine is coupled to an automatic digitally controlled transmission with six gears forward and one backwards, that replaces the old manual with eight gears forward and eight backwards, while rigid axles have been replaced by independent suspensions. All those changing have provided a considerable increase in mobility. The prototype vehicle, exhibited at DSA alongside a non-modified Condor, has been tested by the Royal Malaysian Army, Deftech and the service being now discussing what else might be done as part of the upgrade. The Royal Malaysian Army had over 400 Condors, but EDR Magazine understands that currently those in service are around 350. It is still unclear how many of them might be upgraded.