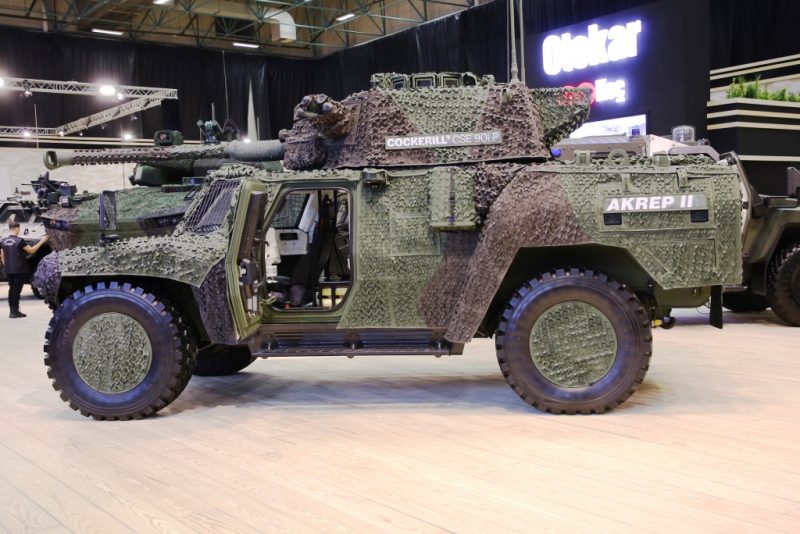 At IDEF 2019 Otokar exhibited a new vehicle, the Akrep II, with a wholly new propulsion concept, the so-called Akrep IIe being a fully electric vehicle. Involved in electric propulsion with its commercial division, the company decided to exploit that know-how to migrate the technology onto a military vehicle. It was clear from inception that the resulting vehicle was more an R&D tool than a product to be sold, As Otokar representatives put it during IDEF 2021, the 4×4 exhibited two years ago was definitely a concept vehicle, that allowed to demonstrate some technologies. It was announced at that time that the Akrep II had been designed to cope with different types of propulsion, including hybrid diesel-electric and conventional diesel.

Among the novelties exhibited at Otokar booth at IDEF 2021 there was the diesel version of the Akrep II, named Akrep IId. The new powerpack was hoverer not the only new feature introduced on the Akrep II, which according to Otokar is now a ready vehicle, which completed company qualification tests with its new diesel propulsion.

Dimensions have changed, length being increased from 5.5 to 5.9 meters, width remaining at 2.5 meters, while height over hull stepped up from 1.8 to 1.95 meters, which makes anyway the Akrep II a low silhouette vehicle. Gross vehicle weight has increased accordingly, the current ready-for-production vehicle GVW being 15 tonnes versus the 13.5 tonnes declared in 2019. How much this is due to dimensions increase or to a further protection improvement is not known; while officially protection levels remain classified, the company declaring a “very high mine and ballistic protection,” EDR On-Line understood that the exhibited vehicle was fitted with a Level 3 all-round armour package. In the Akrep IId the two 180 kW electric motors fitted in the Akrep IIe have been replaced by a single diesel engine providing a 360 hp output.

Although conventional, the powerpack is however quite unique in the military arena, as a U-drive has been adopted in order to shorten the pack, to fit it inside the rear engine compartment which is pretty squared; the engine is located on the right, with the transmission on the left. The main reason is that Otokar intends keeping the capability to install a manned turret on its Akrep II, hence the need to keep the room for the turret basket in the middle of the vehicle, as with the Cockerill CSE 90LP installed on the vehicle exhibited at the Istanbul event. The two-man turret developed by John Cockerill is armed with a 90 mm low pressure rifled gun with a 36 calibre barrel length, which allows direct firing as well as indirect fire at a range of 6 km with a 30° elevation, making a small vehicle like the Akrep II an agile and powerful fire support system. Five spare ammunition are available on each side of the vehicle that add to the 12 rounds available in the turret. The CSE 90LP is a pretty low turret, which should add no more than 600 mm to the vehicle height, making it a low visible target.

One optional item that has been developed in the last two years is the steering rear axle; this not only allows to reduce the turning radius from 8 to 6 meters when counter-steered, but also permits “crab” movement when steered the same way of the front axle, few vehicles having that feature, one being the Arquus Scarabee. Otokar intended to adopt this solution since the beginning, but to avoid delaying the concept vehicle development this was built without that feature. The crew remains of three, with the driver in the middle of the vehicle accessing its eat via side doors, and in the case of the variant seen at IDEF the commander and gunner are hosted in the turret, to which they access via the upper hatch. The vehicle on exhibition was fitted with the multispectral Mobile Camouflage System (MOCAS) developed and produced by +TDU of Turkey. This net ensures signature reduction in the visual (380-760 nm), near infrared (760-1200 nm), thermal (3-5 and 8-12 µm) as well as against radars (2-100 GHz).

Beside the fire support variant, Otokar has also designed a reconnaissance version of its Akrep II, fitted with a telescopic mast carrying various types of sensors. Considering that such a vehicle might spend most of its time stationary, with all its electro-optical sensors active, an auxiliary power unit will be integrated. The design will allow having all sensors inside the vehicle while on the move, protecting them from environmental threats, while also not giving out the peculiarity of the vehicle that would look like a normal patrol vehicle.

In perspective the Akrep II might well be developed as an autonomous vehicle, its electrically controlled main functions, such as steering, acceleration and deceleration being carried out via drive-by-wire, which make it easy to add autonomous functions without the problems given by mechanical interfaces.

Numerous African delegations were present at IDEF 2021, and according to Otokar the Akrep II in the fire support variant attracted considerable interest, as many of the nations of that continent have already in service armoured vehicles fitted with 90 mm guns.