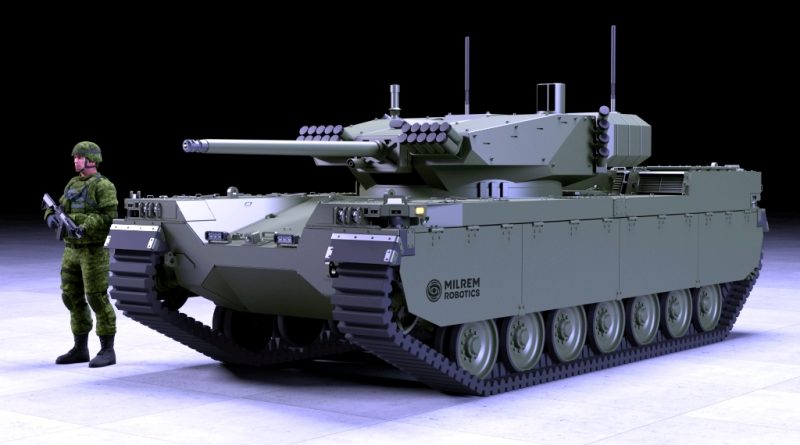 The rhythmic sound of the 30 mm Bushmaster II cannon covers that of infantrymen small arms, the direct fire support element allowing the soldiers on foot to advance towards their objective. To do so the tracked vehicle was obliged to take a pretty dangerous position, however the decision was easier this time, as the combat platform does not host any soldier. It is a Type-X Robotic Combat Vehicle (RCV), a new category of land systems developed by Milrem Robotics of Estonia, leveraging the know how acquired with its Tracked Hybrid Modular Infantry System (THeMIS), sold to nine countries, seven of them belonging to NATO,  that during recent defence exhibitions was used as a platform by many companies to provide unmanned solutions armed with their weapon systems, and which was successfully deployed in Mali by Estonian Army units.

The fictional scenario described earlier might soon become reality. The mock-up of the Type-X RCV would have welcomed visitors at the Milrem Robotic stand at Eurosatory, but the unfortunate pandemic that hit the world prevented the attendants at the Paris exhibition from seeing what would have probably been one of the most innovative vehicles exhibited.

As said, the Type-X RCV is designed to provide direct fire support to mechanised units when no main battle tanks are around, to which by the way the new product of the Tallin-based company looks very much like, albeit in much reduced dimensions. “Following our sucessful product that provides logistic support to infantry units we started thinking how to support mechanised formations,” Kuldar Väärsi, Milrem Robotics CEO tells EDR On-Line, “so we came up with an idea on how supporting Main Battle Tanks (MBTs) and Infantry Fighting Vehicles (IFVs), discussing with potential customers, until one of them that I cannot mention has shown a definite interest, allowing us to start the true development programme around two years ago.”

The Type-X RCV is 6 meters long, 2.9 meters wide and 2.2 meters high, at the top of the turret, and has a weight of 12 tonnes. For comparison purposes, a CV-90 Mk III IFV is 6.8 meters long, 3.2 meters wide and 2.8 meters high, with a GVW of 35 tonnes, the MK IV GVW reaching 37 tonnes, which means more than three times that of the Type-X, while dimensions are in the same order of magnitude: “this was a decision we took in order to provide it with a mobility comparable to that of IFVs, with which it will operate,” the company CEO explains, the vehicle reaching a maximum speed on road of 80 km/h, its series hybrid propulsion system providing a better mobility thanks to higher acceleration, while the inherent reduced fuel consumption provides a range of 600 km. Operating along Infantry Fighting Vehicles, the Type-X can accompany the infantry without putting at risk the IFVs, carrying a weapon of the same calibre, as it can be fitted with a turret able to host up to a 50 mm calibre cannon, the lightweight chassis not affecting accuracy up to this calibre even when firing on the move. “As far as the turret is concerned, we are working currently with three major turret manufacturers that I cannot yet mention, the gun being considered the mission critical element and being thus protected at Level 4, while the chassis is protected at Level 1,” Kuldar Väärsi tells us.

Propulsion is provided by a series hybrid powerpack in which the diesel engine is used to reload batteries that in turn power the electric motors that provide the traction, no more details being available for the time being, although to maintain a mobility compatible with that of IFVs that typically have a power-to-weight ratio around 18-20 kW/t the Type-X motors should provide an overall power of 215-240 kW. The series hybrid solution allows to have a very high peak power capacity and reduces fuel consumption even more than the parallel solution, where the electric component adds its power to that of the diesel. The engine is fitted at the back, thus sprockets will also be at the back as in most tanks, the main reason being to keep the hot part of the vehicle away from the direct view of the enemy, thus reducing the thermal signature. The Type-X is fitted with Soucy rubber tracks, and considering dimensions and weight its specific ground pressure should be less than half that of an IFV, thus ensuring maximum mobility on difficult terrains such as snow, mud, etc.

Rubber tracks also reduce the vehicle acoustic signature, which becomes minimal considering an all-electric propulsion in the last phase of the approach, the small size providing a reduced visual signature, the vehicle being definitely as stealth as possible. On-board batteries are able to provide a one hour silent drive or a 24 hours silent surveillance, keeping the vehicle static. Väärsi underlines that his company has learned a lot with the THeMIS programme, which fifth generation has twice the power of the original one thanks to a much more efficient energy control system.

“The vehicle maximum height was a key design feature in order to allow our Type-X to cope with the C-130 Hercules size,” the CEO says. The C-130J and the KC-390 can carry one such vehicle, an A400M two and a C-17 5-6 of them. The Type-X is designed to be air-droppable, providing vital fire support to airborne troops while maintaining a logistic footprint  compatible with the logistics of a parachute-deployed force.

Viewgraphs provided by Milrem Robotics show a Command Post dedicated to the control of Type-X vehicles, hosting four operators. “Currently each Type-X will have two operators, a driver and a gunner, however we plan to increase autonomies capabilities and in the end each vehicle will have just one remote operator responsible for mission payload, as we will always keep the man-in-the-loop when a weapon system is installed,” Väärsi states. Milrem Robotics broke down autonomy into functions that were tested in the sand-box, which allowed developing algorithms, either in house or with the support of external partners.

“Since inception it will have embedded functionalities such as way-point navigation, follow-me mode, particularly useful when operating in convoys together with manned vehicles, obstacle detection, Artificial Intelligence being part of the algorithms, which gives the system a machine-learning capability.”

The solution visible in the viewgraph is only one of the many, as the Type-X can be operated via a wide range of control stations, ranging from hand held stations to vehicle mounted stations installed in various types of vehicles. For air-assault operations the control stations would probably be installed in a light armoured vehicle capable to be air-dropped from the same type of aircraft used to deliver the Milrem Robotic Combat Vehicle.

As for the payload, that is the turret with the gun, autonomous modes will be the responsibility of the selected provider and of the customer, Milrem Robotics being responsible for the mobility platform. That said, in perspective vehicle and payload sensors will become integrated, increasing the capacities of the Type-X. Operationally speaking, the advent of the Type-X may well bring some armies to think of a mix of Armoured Personnel Carriers, with limited firepower, and unmanned fire support vehicles, which would bring considerable savings.

According to Milrem Robotics its Type-X not only allows reducing the risks for personnel, but is also cost-efficient, its cost being 2-3 times lower compared to a conventional IFV, the vehicle being also designed for reducing life cycle cost both in terms of maintenance and upgrade. For maintenance, the adoption of the Line Replaceable Unit concept allows ease of maintenance, reduction of manpower and increase of availability on the battlefield, rubber tracks reducing vibrations hence the wear and tear of many components, especially vetronics. As for upgrade, the Type-X has been designed with a modular approach, which allows technology insertions in the form of new subsystems based on the same interface.

The use of standard interfaces might well bring to the development of a family of vehicles, which might include engineer, antitank and air-defence versions.

“While we planned to bring the mock-up at Eurosatory, we are also building our first prototype that should start its first mobility tests in September, shortly followed by the first firing tests,” Keldar Väärsi concludes, adding that the Type-X development was planned since the beginning as a three-year programme. 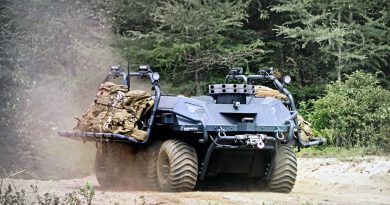 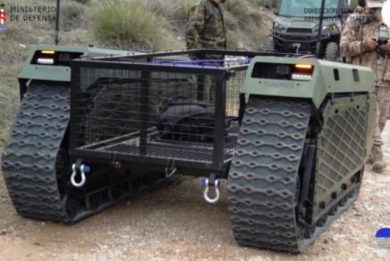